Home » Business presentations & storytelling » Clarity of Purpose: Have a Clear Voice and Clear Topic to Get your Message Across

Clarity of Purpose: Have a Clear Voice and Clear Topic to Get your Message Across 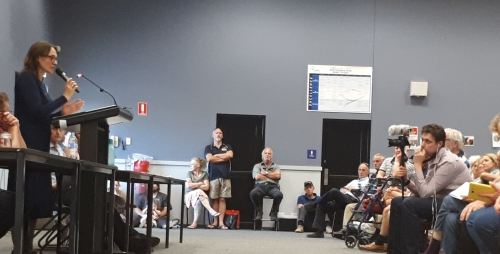 I live in a medium-size town in Australia, with a population of 16,000. Yesterday I attended a town meeting: a big corporation has been approved to establish a commercial goat farm here—with all its accompanying pollution, health hazards and quality-of-life issues. Town residents are not happy at the prospect, and we all turned up to voice our disapproval. More than 400 people attended.

Being new to the Australian political process, I sat back and listened as the townspeople spoke out passionately about the problems such a farm would create. We then listened to a woman with a Ph.D. in public health discuss the obvious and not-so-obvious health concerns that such a farm could create. She did two things right:

1)      Clear Voice: She had a clear, crisp voice that could be easily heard by everyone in the audience. She did not speak in a monotone, and she carefully emphasized words that she wanted to stress. She enunciated her words and spoke at a moderate pace.

2)      Clear Message: She immediately mentioned her own credentials and how she obtained her data (peer-reviewed journals). She immediately let the audience know what she was going to discuss—and then she delved into the data and discussed it in a way that we could all understand. The information she gave supported her point of view, and we all listened intently and gave her a huge round of applause when she finished. We learnt something that evening.

Then a gentleman discussed the history of this farm and what it intended to do. He made two huge mistakes:

1)      Unclear Voice: He mumbled. Even though he had a mic, people were continually clamoring, “Speak up, mate!” Perversely, I felt better, for I thought that perhaps only I could not understand his very pronounced Australian twang. But no. Even with the mic practically down his throat, he kept the sound in his larynx and never projected it forward. He did not emphasize words; they all came out jumbled.

2)      Unclear Message: As this individual was droning on, talking about the history of the goat farm, its purpose, the jobs it might bring in, the market it would serve, I wondered: Whose side is he on? These statistics were interesting, and they could be used to promote the pro-farm agenda. Well, I thought, so he is representing the goat farm. Turned out that he was also opposed to the building of the farm—but his content initially did not make his position clear. (It also did not help that we could only understand one-third of what he was saying.) This gentleman was obviously a well-respected member of the community, and people politely clapped when he finished talking. I glanced at my husband. “Blah-blah-blah,” he mouthed back at me.

While the first speaker came armed with a clear voice and a clear message, the second speaker felt he could rely on his amicable relationship with the crowd. As a result, he hadn’t developed his voice, or his message, to meet the needs of the audience. And that was a pity, for he had a lot to say (I think).

Whether you are giving a speech at an academic conference, sales meeting or town-hall meeting, prepare. Make sure your voice and message tell a clear story and give a clear message.

Remember: It’s your story. Get it right.”

By Eloquent English in Business presentations & storytelling, Communication, Confident speaking, Presentations, Public speaking on February 6, 2018.
← Technical Skills Can Land You a Good Job, but it Won’t Help You Climb the Job Ladder: The Importance of Communication Skills at Work Small talk is not so small →